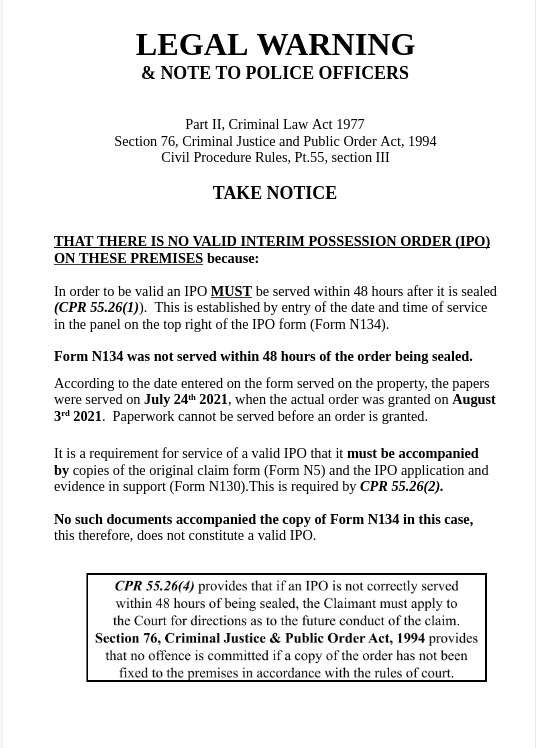 Barbican Community Centre Ready to Resist Illegal Eviction
Following the service of an invalid eviction notice on the morning of 5 August, we believe that we are likely to face a violent and illegal eviction in the morning. We have been served an interim possession order (IPO), which if served correctly would mean it would be a crime to remain on the property 24 hours after receiving it. However, the order was not served correctly and is thus invalid. Legal requirements have not been met because the date and time of service written by the claimant is incorrect and we did not receive the correct court papers along with the IPO.

Whilst both York County Court and North Yorkshire Police have been informed that the pursuit of an eviction would be illegal, we do not trust that they will listen to us or the law on this. In light of the ways police have recently undertaken squatter evictions as seen in Bristol and London, and the violent and illegal eviction carried out by Persimmon Homes at the Barbican Site, we have reason to believe that they are planning to use excessive force to carry out the eviction.

We are asking people to come support the BCC at Fibbers and support those resisting this illegal eviction on site.

We’ll be inside and outside of the site from 9.45am on 6 August, as we are expecting the eviction attempt to come at some point after 10am.

As we got served an invalid eviction notice, we are determined to remain at the site and continue with our community-led projects at Fibbers, even if the police may not comply. For the last two weeks, the community centre has created opportunities for local people to spend time cleaning the abandoned building and make it into a welcoming space for all. We have established a wellbeing room, a library, a kitchen to feed people, hosted live music and housed those who needed it. We believe that North Star would not have been able to coordinate such activities from a grassroots perspective, as they are a profit-driven company. As squatters, we have a legal right to be here and to not be forcibly evicted, despite North Star wrongly claiming that we broke into the site. This allegation is not true as the site was never secured properly in the first place and we were able to occupy the building without forcing entry.

This site has provided a gathering point for people in York, a place for those who need creative space, a place to live and a community space that we can build and create alongside others. We wanted to use these spaces in order to meet the varied needs of the community in a non-hierarchical and grassroots fashion. This vision goes far beyond the intentions of profit-motivated developers, which is also why we chose to do this independently without talking to North Star, whose priority will always be to enhance their image and the value of their shares. The eviction of Fibbers will take yet another focal point of community from the people of York. It will mean that those who have been relying on that space to live and work will be yet again thrown into uncertain situations with few other places to go. The eviction, should it go ahead, will thus be not only invalid and illegal, but also immoral